There are two key reasons for high-energy consumption, low throughput and a rise in temperature of ground materials coming from a hammer mill.

1. Poor hammer milling capacity
Large amounts of colliding energy is wasted as heat due to the high rate of eccentric collision. This only makes materials spin and bounce around in grinding chamber, and does not lead to further size reduction.

2. Poor screening capacity
There’s definitely a material circulation layer being swept along the inner surface of the screen, hindering correctly sized particles from getting through the screen holes in time. As these particles rub against the screen, and each other and crushed by hammers, their size is continually reduced by attrition and collision. Energy is wasted in the production of heat, while throughput is restricted and particles sizes become too small.

Guiding the fluidized bed of material
GTC Technology is a size reduction method that manages to guide the fluidizedbed of material to collide with hammers.
It greatly increases the probability of frontal collision between materials and hammers requiring the same energy consumption .
It makes full use of the kinetic energy within the fluidized-bed of material, and succeeds in enlarging impact capacities 31 times that of single rotor hammer mill, which could dash material into shatters once even eccentric collision .
It stops the formation of a material circulation layer effectively.
It highly improves the efficiency of screening capacity by enlarging by 20 percent the effective screening area and keeps agitating the fluidized-bed of material, thereby reducing the density of the material layer against the screen surface It promises to produce more than 40 percent more throughput under same energy consumption; in other words, it saves more than 30 percent on the energy requirement under same production capacity It promises temperature rises of less than 15°C when grinding aquatic and poultry feed.

Poor hammer milling capacity
Materials, such as corn could be broke up by using little energy when frontal collision.
However, much power is needed for eccentric collision. This is because when eccentric collision happens, a moment of gyration is generated between the impact point and the barycenter of corn.
In general, it only makes the corn spin but does not necessarily break it up. That falls into the category of elastic collision; the impact power turns into the form of heat which is wasted.
However, corn could be broke up along its mid-point and maximum length due to the bending movement if the impacting speed is fast enough. During the process of milling with hammer mills, eccentric collision happens mostly, with large amounts of energy being wasted.
Therefore, methods used manage to increase the probability of frontal collision between the materials and hammers and also enlarge the impact velocity that improve the efficiency of hammer mills.
To see what’s going on in a working hammer mill, researchers designed experiment by using high speed photography technology. High-speed photography required a specially designed hammer mill (see Figure 1) in order to study these effects.

One side of hammer mill was equipped with plexiglass, whole the grinding chamber was visible through a 10mm outside screen. The camera’s shutter rate was 5,000fps, exposure was 1/25,000s and the hammer mill’s rotation speed was 3314rpm, with the hammer tip speed at 69m/s when photographed. Two videos were captured separately when grinding corn at normal load and below normal load.
Videos were analysed and processed in professional image processing system.
Some typical corn particles were tracked and their movements were captured (see Figure 2-3). It could be seen from the video that there is definitely a material circulation layer formed on the screen surface in chamber. 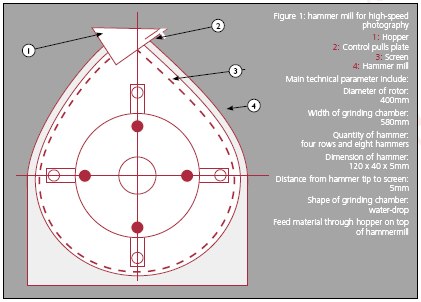 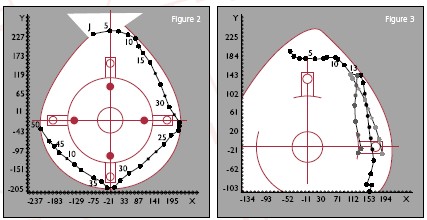 Poor screening capacity
According to traditional size reduction theory in working hammer mill chambers, and due to centrifugal force, bigger particles circustay tight and close to the inner screen surface while the smaller particle are further from the screen.
Big heavy particles are difficult to exit through the screen holes and block the holes, while small light particles are far from the screen hole. They also cannot easily exit through the screens, thus forming a material circulation layer with outer big particles and inner small ones.
In view of the above, various shapes of grinding chambers were developed to disrupt the material circulation layer, such as hexagonal, elliptical, water-drop etc.
However, some researchers carried out corn grinding experiments to compare every chamber shapes and they found that feeding was at a low speed, compared with round chamber, hexagonal, elliptical, water-drop shaped chambers’ capacity per kilowatt were higher; but when feeding at a higher speed, capacity per kilowatt of hexagonal, elliptical chambers were lower than round one, while water-drop one was similar to round one.
This is because when feeding at a higher speed, stagnated materials appear at every corner of the hexagon, at the two ends of ellipse and top frontal impacting screen area of the water-drop chamber (see Figure 4). 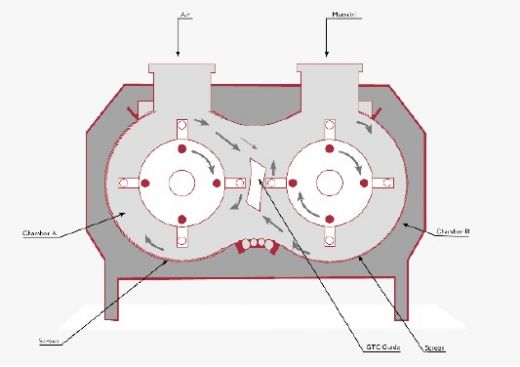 Stagnated materials reduce real screening area and as big particles find it hard to bounce at these places, capacity drops. If you continue to increase the speed of feeding, the stagnated materials will grow in size to fill the chamber so that it becomes a round one, and the real screening area is reduced sharply.
In truth, however, big and small particles are distributed evenly in the material circulation layer; density distribution is near the inner screen surface as density is increased, so that the material circulation layer is looser on the inner area and tighter on the outer area.
Therefore, reducing the density of material on inner screen surface can largely improve the screening capacity of hammer mills.
Researchers designed a special hammer mill (see Figure 5) to acquire material circulation layer distribution data directly, which revealed the truth.
There’s a fixed partition between grinding chamber and fan chamber. 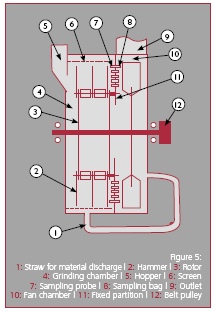 Eight sampling probes (four as a group) were installed in a radial direction evenly spaced on a fixed partition (see Figure 6). 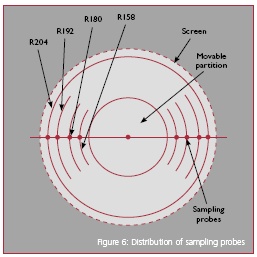 Main technical parameter of hammer mill
Width of screen: 200mm
Diameter of screen hole: 2mm
Motor power: 5.5kW
Hammer tip speed: 60m/s
Feeding speed: 700kg/h
Corn moisture content: 12.5 percent
Single grinding quantity: 9.5kg
Researchers checked the materials in each sampling probes and found that average particle sizes was similar along entire radial direction, all around ensemble average size of sample, 1.12±0.04mm. (Ensemble average size of sample was tested by mixing all samples from the probes.)
Density (material mass per unit volume) distribution of the material circulation layer along the radial direction was low to high. That is, the bottom of material circulation layer, which was close to the inner screen surface, density was high; the closer to the center of chamber the lower it became.