Global agriculture is heading towards challenging times, since the world's population continues to grow at an ever increasing rate. Thus, consumers' demand for sufficient supply of high-quality safe food is a main goal. Decreasing acceptance of antibiotic drugs in many parts of the world and the concomitant debates about residues and contaminations in animal products are driving factors in the search for new and sustainable concepts.

On the other hand, producers cope with increasing production costs and growing market pressure, fueled by increasing prices for energy, raw materials and labor. In consequence, the utilization of inputs has to become much more efficient.

From the standpoint of animal nutrition, this means feed conversion ratios must be dramatically improved in the near future, while reducing mortalities and medication costs at the same time

New concepts are required to master all the challenges ahead. Thus, the animal production sector will have to respond with appropriate tools. Obviously, all the surrounding conditions point to one direction:  Implementation of safe, sustainable and profitable production techniques

Natural Growth Promoters have been a key research area in BIOMIN since the founding days of the company. The idea of Natural Growth Promotion has been developed to provide powerful and sustainable feeding concepts based on gut health management through natural feed ingredients.

The digestive tract is a vital organ in which feed is reconstituted biochemically into body growth. This is a huge metabolic effort, and unquestionably, only a healthy digestive tract is capable of dealing with this effort in a competitive biodiverse environment and under sometimes challenging external conditions

The fundamental objective is to keep this important organ healthy, thereby maintaining its functionality on a high and efficient level. The gut microflora is an active participant in this digestive process, being influenced by diet, host physiology, as well as environmental factors and stress. Conway (1994) referred to the relationship as "the gut ecosystem", as shown in Figure 1.


In a healthy animal, the gut microflora consists mainly of beneficial bacteria (e.g. Lactobacillus, Bifidobacterium or Bacteroidaceae), but also a small portion of potentially pathogenic bacteria (e.g. Salmonella, E. coli, Clostridia, Campylobacter, Brachyspira) is present. It is of major interest to keep the gut microflora under control, because, to a certain extent, gut microorganisms compete with the host animal through

Furthermore, a shift in the composition of the gut microflora towards non-beneficial or pathogenic microbes can easily result in the outbreak of diseases and the spread of these bacteria across the production chain. In this connection, certain pathogens are supposed to gain more importance in the years to come. As Salmonella control measures were implemented, other pathogens gain more importance. For example, Campylobacter sp. is causing more public concerns than Salmonella. Research emphasis therefore focuses on finding natural substances with the capability of counteracting relevant pathogenic microorganisms.

Phytogenic compounds, including herbs, spices and essential oils, have been gaining tremendous attention in human health as well as animal feeding programs during the last few years. Their use has a long history in human consumption as flavors, fragrances and medicines. Their beneficial effects have been shown in a vast number of scientific reports pertaining to their antimicrobial, antifungal, antioxidant and many other biological activities. Nowadays, these compounds have been used more and more frequently as animal feed additives. In deed, a growing number of scientific and field reports show that these compounds exert substantial performance-enhancing effects in animals (Kroismayr et al., 2008a; Windisch et al., 2008). Hence, phytogenic substances are considered to be well accepted by consumers due to their natural character and proven efficacy. Figure 2 illustrates the three general features of phytogenics, which make them attractive in animal nutrition.

In vitro Screening for Antimicrobial Activity

It is commonly accepted that phytogenics have strong antimicrobial activities, which is a main reason for their overall beneficial effects on digestibility and metabolism. A first step in product development therefore includes a large number of tests and screenings under in vitro conditions. In such experiments, potential compounds are tested for their antimicrobial activity against several relevant pathogens.

Whereas the first method is only followed by a yes-or-no decision, the two latter methods allow for determining the minimal inhibitory concentration (MIC), which is defined as the concentration of test substance that inhibits 50% (or more) of the bacterial growth. The procedure of the turbidimetric microplate method requires a well-grown culture of the respective bacterial strain and several dilution steps of the test substance. The 96 wells of the microplate are filled according to a definite layout. During 24 hours of incubation the optical density is measured every hour to monitor bacterial growth continuously. The amount of bacterial cells finally corresponds with the optical density measured in the wells. In wells where the concentration of the test substance meets the MIC, bacterial growth is inhibited and the optical density remains low (Figure 3). The antimicrobial effect of oregano usually varies as a result of differences in variety, location of growth, harvest time, extraction procedures and hence ingredient composition. An example showing the growth-inhibiting effect of a specific oregano oil (MTP21) against Salmonella typhimurium is shown in Figure 4. 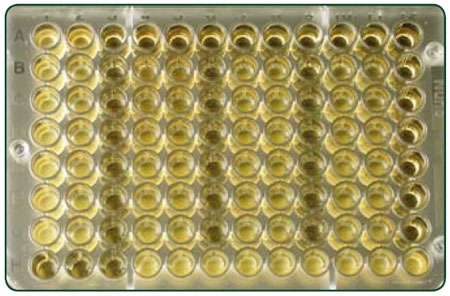 Figure 3. Example of a microplate after 24 hours of incubation. Turbid indicate refer to intensive bacterial growth

Figure 4. Bacterial growth and inhibition of Salmonella typhimurium by the use of oregano oil MTP21 in five dilution steps

Finally, after all the in vitro work resulted in a sophisticated product formulation, the additive is tested under in vivo conditions. With Biomin® P.E.P., a large and growing number of reports is available for different species including pigs, poultry, calves and fish. Due to the constant testing of the product in scientific and field trials, new data is generated continually showing the benefits of Biomin® P.E.P. under different conditions and in different locations.

The effects of Biomin® P.E.P. on the gut microflora were investigated in a PhD project in Austria (Kroismayr et al., 2008b). In order to have a positive control, one group of pigs was fed Avilamycin, an antibiotic that was routinely used in the EU as growth promoter prior to the ban in 2006. Results are shown in Table 1 for the ileum and caecum.

Table 1. Effects of phytogenics and Avilamycin on colony counts [log CFU per g fresh matter] in the ileum (Kroismayr et al., 2008b)

Pigs fed Biomin® P.E.P. had a reduced gut microflora, with the portion of beneficial bacteria increasing relative to the portion of undesired bacteria. Thus, there was less competition between the host animal and its gut microflora, and finally, pigs fed the phytogenic additive were able to perform better (Figure 5). Twenty-one days after weaning, average daily gain (ADG) and FCR were improved by 5.9 and 1.9%, respectively, when the pigs were fed phytogenic. This trend was also obtained after 50 days.

Gut health management should be based on the implication of sound and sustainable feeding strategies. Within a range of potential alternatives, phytogenics are highly promising. They possess not only flavoring properties, but also exert biological activities and have pronounced performance-enhancing efficacy. Their beneficial effects have been shown in vitro and in vivo and finally their mode of action turns feed inputs into higher performance and profitability.