Tilapia is the second-most important group of farmed fish after carp. It is farmed in at least 85 countries, with the major part of the production coming from Asia (China) and Latin America (Ecuador, Honduras and Costa Rica).

According to the U.S. National Fisheries Institute, farmed tilapia ranked 5 on its 2007 “Top Ten” list of the most consumed fish and seafood in the United States. Each American ate 1.0 pound of tilapia in 2006. Of the ten species listed, including shrimp, canned tuna and salmon, the tilapia consumption rose most significantly. 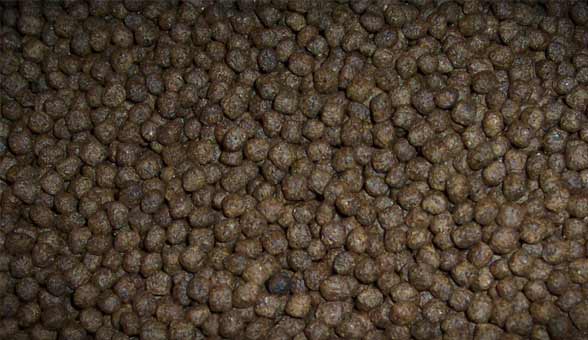 From the beginning of the new century, Mexico has been outlined as an excellent option for aquaculture development, especially as regards TILAPIA and SHRIMP farming, which is mainly due to local advantages, such as low-cost manual labour, processing and packing compared to the large international producers. Other promising prospects include the Mexican consumers’ adoption of the species in their diet, the proximity to several large consumer markets, the availability of land and sea for the farming and the national infrastructural support for aquaculture projects.

With an estimated tilapia production of 85,000 tons per year and a projected annual growth of 2-8%, Mexico ranks 8 of the world-wide tilapia production. Conscious of the necessities and future requirements for high-quality feeds for aquaculture species and also aware of the difference in which the various organisms take their feed from the surrounding environment - by flotation in the case of tilapia and by sinking in the case of shrimp - Andritz Feed & Biofuel now offers the Mexican market technology and know-how for high-quality fish feed production in the aquaculture farming.

Andritz Feed & Biofuel's knowledge is based on a lifelong commitment to the customer and a century of experience in the supply of equipment for the production of cost-effective, quality and high-performance feed. Andritz Sprout is a unique company with the ability to supply all machines in the extrusion line and with an intricate knowledge of each and every key process. Homogeneous solutions from intake to finished feed places Andritz Feed & Biofuel among the leading companies in terms of extruded fish feed.

The opening in 2006 of the Andritz Feed & Biofuel office in Veracruz, Mexico, makes it possible to be even closer to the customers in the Central American region and meet any need for equipment, spare and wear parts or service. From Andritz Feed & Biofuel's point of view the Central and Latin American markets are among those regions that will set the standards for the production of floating feed, and we are continuously focusing on this in order to meet the demands for highquality fish feed.

The future will require high energy products based on protein sources having poor liquid absorption properties. This, coupled with micro liquids addition, places stringent demands on tomorrows’ vacuum coating systems. Extruded pellets have a very porous inner structure. It is within the pores of this internal structure that added liquid is retained. The object of vacuum coating is to use a pressure differential to force liquids through the outer layer and deeply into the porous area of the pellet.

The Andritz Feed & Biofuel's system provides accurate control of vacuum pressure, liquid addition and cycle time to allow flexibility and repeatability in terms of degree of absorption and penetration. 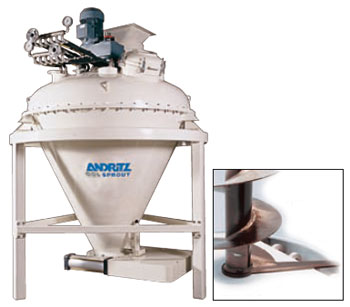 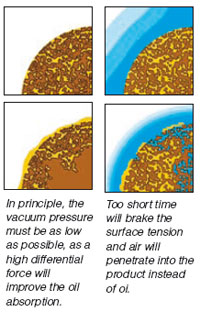 Optimum utilization of the starch in the formula is of vital importance in order to obtain sufficient expansion (bulk density). In this way the risk that the oil added in the coater will leak from the product is minimized.

The FLEXTEX system controls the SME at a level suitable for achieving the required bulk density. The SME (Specific Mechanical Energy) is adjusted by reducing the opening area at the end of the extruder with a piston. 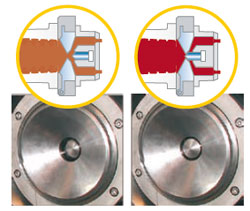 To control the total product weight may require between 1-2% fat in the extruder barrel. When oil is added, the SME will drop and the requested bulk density will not be achievable. The FLETEX readjusts the SME by means of a more restrictive compensation to achieve a bulk density of approx. 400 g/l (_10)

To gain the required bulk density in order to obtain optimal floating properties, the die plate must be properly designed. A number of specifications must be followed, such as open area, land length and hole design. In figure 1 the open area is defined.

A total open area of 100-120 mm2 per dry ton is reqired in order to obtain sufficient counterpressure to develop the expansion (bulk density).

In figure 2 the land length is defined. The L/D ration is the relation between hole length ad hole diameter. For floating feed a total of 0.7-0.9 L/D ration is required. 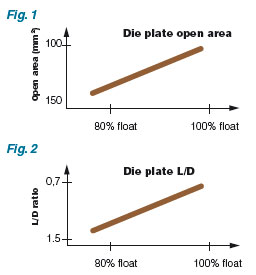 Development of white build-up in the extruder is a well-known problem, especially for producers of fish feed food. White build-up is caused by a combination of starch (when cooked) and fish meal from specific regions and fish species. Many attempts have been made to eliminate the problem, and only a critical selection of fish meals has been found to have an effect. However, due to the poor availability of fish meal this is not possible for most commercial producers.

By using surveillance in terms of the Bulk Density System in combination with the ECS (pressure airlock system), the production time in between the die cleaning required can be substantially extended. 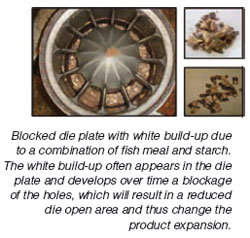