Rising costs of raw materials increases the demand for product optimization and yields. Now, the means of accurately controlling the moisture content within a batch flow process has been finally breached within industry. DSL Systems Ltd has teamed up with Intelscan to provide moisture measurement and control as an extra in the AutoPilot4Feed package.

Several designs utilising microwave technology as a means to measure moisture are currently under trial with different companies but one of the most outstanding has been proven after winning awards at the Victam 2007 exhibition.

Iceland based Intelscan the manufacturers have teamed up with DSL Systems Ltd from the United Kingdom to distribute the in line moisture meter throughout the UK. After recent trials the figures are proving how accurate the system is in achieving preset moisture levels within animal feed products.

Patented microwave technology uses co-polar microwaves, which are transmitted through the product back and forth. A reflector plate changes the polarization of the wave.

The advantages of microwave over near infrared are well stated as microwave fully penetrates the product and doesn't just measure the surface of the material. But the advantages of this process over other technologies is that the meter is unaffected by the composition of the product, meaning that only one calibration is required for a variety of products, recipes and densities.

The attenuation and phase change of the signal that has travelled twice through the material is measured to provide not only the moisture content but also the density with high precision, allowing more accurate liquid addition control further in the process. The meter is the only one of its kind to provide moisture content density and temperature continually in the flow process environment. With 100 measurements a second, high accuracy is maintained whatever the speed of the process flow. The meter has no moving parts, is non destructive and not effected by dust or humidity, which keeps maintenance to a minimum. 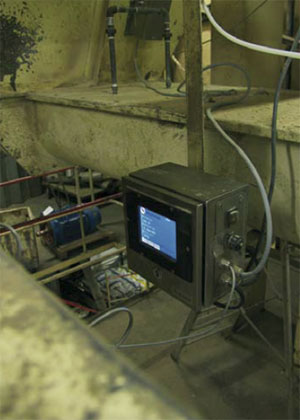 Moisture metering installed in a conveyer.

From a live 10 day trial consisting of 280 tests asking for an average level of 13.7% moisture it was found that an average 0.4% moisture top up was required to achieve the formulated level for the finished product. During the testing period, 2,524 tonnes of feed was produced, out of which an extra 9.56 tonnes of liquid was included to achieve the required level to an average accuracy of better than 0.1%, thus proving the viability of the meter and control in the working environment.

When included with the AutoPilot4Feed control system this level of accuracy on a continuous process will create a feed back loop that enables the system to correct any raw material moisture deficiencies at a later stage in the process. Also taking into account other formulated liquid additions and the effects of cooling or drying processes, an algorithm is utilised to calculate any addition liquid requirement to achieve the targeted moisture content at finished product stage.

If the meter is positioned at a batch mixer under hopper or discharge spout, then the accuracy and logging is such that even single batches can be monitored and graphed throughout their discharge. This is to ascertain if the product mix time is correct to give a consistent level of moisture throughout the mix, which is essential to achieve product consistency during extrusion.

As the average moisture content is stored with each individual product then the level can be maintained at an inline mixer or press conditioner as required. With this level of control the target moisture level can be more accurately formulated and maintained giving consistent savings and eradicating process loss.

With the addition of an inline moisture meter at a point just prior to the finished product stage, for example a fats coater hopper, then the control loop will become properly closed and the system will automatically adjust levels that may have seasonal or daily causation such as humidity and ambient temperature.

Figures provided should indicate a payback time for moisture control as an addition to an integrated control system will work out at less than 3 months in an average sized feed mill making the system an affordable proposition for any company's accountant.